Periodically, students complain about the speed of wifi on our guest network at school. I thought I would take a few moments and document my observations. The tool I used was the Network Speedtest app on my Windows RT Surface (hey, I have to find some use for it these days). This app was developed by Microsoft Research. I thought it best to standardize on one piece of hardware and software to perform these tests so comparisons are as equitable as possible. I have been taking periodic tests on the guest network as well as my home network. While these results are certainly not scientific (nor an appropriate sample size), they do capture the issues reported repeatedly by students. Let’s first examine the guest wifi network on campus.  I first tried this network speed test in late October, 2013. Details are below. You can always click on the image to see a larger version. The key item to note is the download speed of 1.86 Mbps. At best this is suitable for low bandwidth video. It is most useful for checking email and other text based tasks. 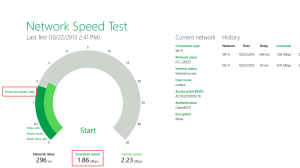 Ok, I ran the test again in late January, 2014. For comparison purposes, the speeds have increased (slightly). Keep in mind that I typically run these tests in the evening (and there are few classes on campus so the speeds should be their best). Again, note this network speed is most useful for checking email. We are now up to a whopping 2.66 Mbps download speeds. Curiously, upload speeds are marginally faster in both instances. 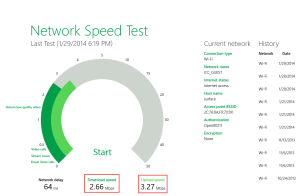 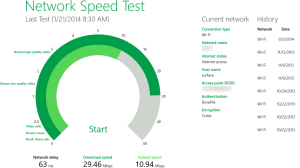 You will note that my speed is approximately 30 Mbps for download and 11 Mbps for upload. Yes, my poor home network is roughly 10 times faster (for download) than the school network (and roughly 3 times faster for upload). I fear that this is what many students experience in other environments. Their perception is that speeds should be comparable on campus. After all, it is a corporate network. I have already seen instances this semester where students attempt to download some software, throw in the towel, and decide it is quicker to drive elsewhere (even all the way home) to finish the download. Yes, the speed to download software includes the time it takes for them to drive elsewhere (and it is still faster than to use the guest wifi).

I thought it was time to document this issue in the event anyone needs a reference point. I completely understand the issue raised by students. I struggle why the guest wifi is so slow since so many students rely upon it for their school work. I look forward to your comments. What am I missing here?