Knowing this post will be visible on Christmas Day, I thought it might be appropriate to discuss the latest device I have obtained – my Acer C720 Chromebook. One of my grandsons is using Chromebooks in school and it seemed appropriate to get one in case he ever needed to use it while at our house. Ok, I also wanted to see why these are so popular in the K-12 education arena. I have been working with with for about a week and wanted to share my initial observations. For those who are curious, I am writing this using the Chromebook (that includes editing the images).

First, what do I like best about the Chromebook?

So those of the main advantages and disadvantages. No I want to focus a bit on some of the capabilities and observations I have in my limited use of this technology.

It is relatively easy to set up alternate accounts (already have one set for my grandson). One can also use the machine as a guest (reminiscent of that capability on a Mac by default). That being said, it appears that the majority of apps you install are only available to the account which downloaded them. That would also make sense from a security perspective, but it seems that one would be wasting a bit of local disk storage for these if there are multiple users of the machine.

The overall appearance (once one has authenticated) is similar to other desktop environments (except that every app will launch in the Chrome browser). Settings are on the right. I included a screen capture (below) so those unfamiliar with the environment can see what it looks like. [You may need to click on the image to enlarge it.] 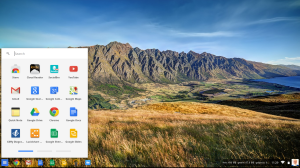 I clicked on the apps icon to display the apps. As you install more, you get addtional bars at the bottom of the app window. I have not been able to determine a method to group apps together in folders (like one can do on iOS devices). You can click and drag the app icons to rearrange them. There is also a search capability (at the top of the apps window). I included a cropped image focusing on the apps only in the screen capture below. 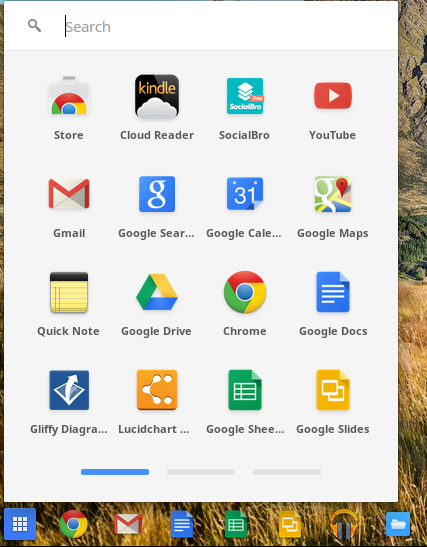 As in other environments, you can pin items to the bottom of the screen. I pinned the Files icon as I find I often refer to the items I have placed on either my Chromebook or on the Google Drive associated with it.

If we examine the files on this computer, we see the following. Noter the tight integration with Google Drive. You can also see that there is a limited amount of drive space available on the Chromebook itself (encouraging everyone to take advantage of Google Drive). 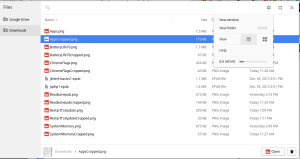 Since every app runs in the Chrome browser, one must take advantage of online tools for editing images. I have been using Pixlr for this post.

From a web development perspective, one would need to use an online (like Cloud9) and transfer files accordingly. Of course, from an educational perspective, one could simply set up a Google site in a moment and use that. As one might expect, the majority of work that a typical user of a Chromebook would do is tightly associated with Google apps.

I will continue to investigate the Chromebook and try out different apps. It appears to be very useful to take notes (using Google Docs).

From a hardware perspective, I do note lack of output other than HDMI. That would work for modern school environments, but I know the majority of our projectors at the college are lucky to have VGA. This means I would not easily be able to provide a projector view of the Chromebook without some additional hardware. As best I can tell, this costs between $10 and $20. Keep in mind the latter is 10% of the total cost of the machine.

I am curious what others have experienced with the Chromebook. I look forward to your comments below,