My MS Surface tablet arrived on Friday, October 26, 2012. I had a chance to experience this device at the 2012 Working Connections Institute and decided to purchase the Windows RT version (with the ARM-based processor). I could have waited for the more expensive version, but decided this would likely be the tablet many students might purchase. Given that I already own multiple Android tablets (including a Kindle Fire, Samsung Galaxy Tab 10.1), an iPad, ad a BlackBerry Playbook, this seemed like a reasonable addition. Furthermore, since I teach mobile app development, I wanted to see what one could build with HTML, CSS, and JavaScript for Windows devices.

It arrived on Friday morning and I configured it and got it fully charged before I had to deal with other activities. I took some additional time to work with it on Friday night and Saturday and Sunday. I mention this because I have not had a great deal of practice with the device. It is running Windows 8 (which has a significantly different user experience). So, there was a significant learning curve. Unlike my initial experiences with Android, BlackBerry, and Apple tablets, my experience with the Surface can best be summed by one word – frustrating.

User experience matters. Unfortunately, I have familiarity with many other tablets so my expectations were for a similar interface. I find that I have to re-learn a number of things. I suspect this will improve over time, but many items are not as obvious as they are on other tablet platforms. Let’s start with the hardware. In many respects, this device seems to be a bit confused (is it a PC? is it a tablet?). During the initial configuration, many of the questions referenced setting up the PC, for example. I chose most of the default settings (I know there are security issues). The device itself is light and easy to carry around. It comes with a keyboard. You have to pay significantly more if you want a keyboard with function keys. Regardless, this one comes with a Windows key, Ctrl, Shift, Alt, and Fn. It also comes with a trackpad. My first reaction was – huh? It is a tablet, why can’t you just touch the screen? After working with this for a few days now, my reaction remains the same. I find I am touching the screen and not using the trackpad all that much. Would seem that the space could have been used for other keys. The keyboard itself takes a little getting used to. Unlike other tablet keyboards I own, this one has no moving parts. This means the keyboard feels a bit like one is typing on cement. It does take a bit of getting used to.

On a positive note, the battery life seems to be phenomenal. I purposely left the device powered on and used it throughout the day over the weekend. I only have had to recharge it once. It connects to most wireless networks (including mine which do not broadcast their SSID). Curiously, it won’t recognize my iPhone wireless hotspot. I hope to have that figured out soon. The screen resolution is different – 16:9, but that doesn’t seem to be a major factor.

MS does have support forums and a Twitter account. Even on the day of release, I found that they responded relatively quickly to my initial questions. For example, I wanted to do screen captures (to include in this blog post, for example). At first, I was told to use the snipping tool (which only works on the desktop). However, after a couple of hours, someone informed me to hold the Windows logo (bottom center of the tablet) and hit the volume down (on the left side). Note I said Windows logo, not Windows key. Intuitive, no. But, it works. Here is what I encountered when I first authenticated on the tablet. [click on any of these images to see them in full size]. 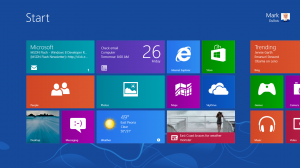 If you examine the above image in more detail, you will see there are significant differences to what one experiences in Windows 7. Obviously there are tiles for various apps. You can change the size of these by long tapping and selecting smaller (to get a square instead of a rectangle). Your user account is shown in the upper right corner and you swipe to see the remainder of the tiles. You can install new apps by visiting the Windows store. To search the store, swipe on the very right of the tablet and choose store and search. Note the screen captures below. 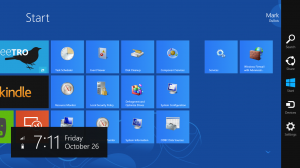 Selecting the search icon (upper right) allows one to search various locations (for example the Windows Store). That is shown in the image below. 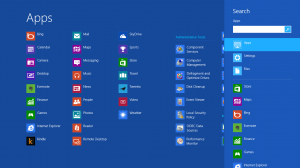 There is a built in browser (IE 10) and one can access the desktop to gain a more traditional view. Except there is no longer a start orb visible by default. The desktop is shown below. 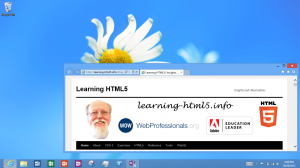 So far so good. I next decided to try out the browser. IE 10 is the default. No Flash available on the app, but Flash is installed on the desktop version. Let’s view a lynda.com tutorial. Oops, no Flash in the app. So I changed the display type to WMV. Still doesn’t work. Ok, I switched to the desktop. Flash is installed. Yet, this doesn’t work at the lynda.com site. Screen capture is below (you will clearly note that what the browser reports and what works are different). In fact, none of the formats will work to view a lynda.com tutorial on the Surface. My frustration level takes a hit. 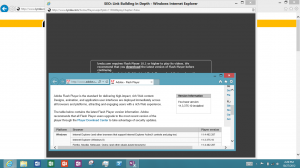 As you can see, I clearly have a higher level of Flash installed than what is needed to view the video, but…

Ok, let’s move on. I can just install another browser and go from there. I go to the store and discover… there are no other browsers. I realize this is due to the ARM-based processor, but this may become an issue as I don’t always like to use IE as my primary browser. FYI – if you go to any of the alternate browser websites, you will discover that you can download their software, but it won’t install. Ok, my frustration level takes another hit.

I do note there are not that many apps yet available in the Windows store. I was looking for DropBox, for example. I know, what am I thinking, there is SkyDrive. Yet, the majority of my files are in DropBox since I use that on my Playbook, Android tablets, and iPad. Finally managed to find a DropBox app, but it is a read only app. I can’t upload anything. Hope that changes soon. In the meantime, my frustration level took another hit.

Software that does come with the Surface includes Word, Excel, PowerPoint, and OneNote. Well, the preview versions. As I understand the licensing, since I have a personal device and am not part of an organization (the school did not buy this for me), then I should get the full versions of these apps when they become available. I created several documents, stored them on my SkyDrive and was able to then download them to a local computer and open with Office 2010. Slick.

Ok, I bought the RT version for a reason. I suspect part of my frustration comes from lack of experience. For example, I have found that many apps have options you can access by swiping from the bottom of the tablet. Again, not intuitive, but reminiscent of my PlayBook.An example of these options is shown below. 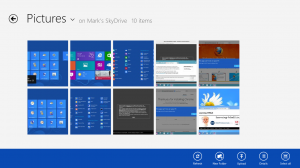 Ok, now for my biggest and most frustrating issue. Security. I could not find a single anti-virus app in the Windows store. Sure, there is a Trend Micro app which shows you the latest security exploits and which country has generated the most recent hits. But… no… anti-virus (or anti-malware). Am I to assume that Windows (and its firewall) are sufficiently secure? For the moment, I have to. And I find that very frustrating. I simply don’t know that the device is protected.

One more item of frustration (which I hope will soon be resolved)… I might want to use this tablet for demonstration purposes in a class (it has PowerPoint). However, I can not find any existing dongle which will allow me to connect to anything except HDMI. Unfortunately, most of the places I might use this do not have HDMI as an available option (many of the projectors are a number of years old). Has anyone found a way to do this (without uploading to SkyDrive and then downloading on another machine)?

That being said, I am looking forward to developing some simple applications in HTML, CSS, and JavaScript and testing them on this device. That will be the subject of a future weblog post.