Just prior to the start of the Adobe Education Leader Summer Institute, a group of us gathered at a local (San Jose) Mexican restaurant. As you can see, this event was well attended. 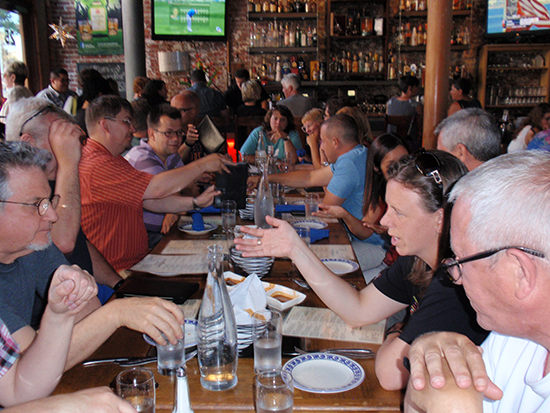 I suggested this place because several of us had eaten there the prior year and I knew they served chapulines. For those who don’t know, that is a term for grasshoppers. Not everyone tried these tasty little beasts, but many did (and I commend them). Part of the reason I publicize this is that I firmly believe we should be doing more of this (eating insects). I suspect these will be one of the main sources of protein for humans in the later parts of this century.For those who have never experienced this dish, I provide the photo below. The grasshoppers are usually served with a lime sauce and chips. Personally, I prefer them by themselves. One typically tastes the seasoning more than the grasshopper. 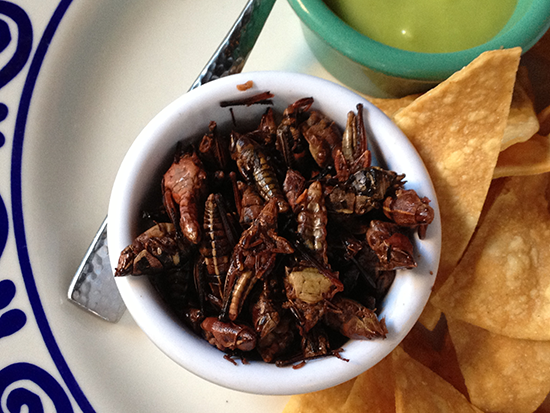 I know, you are already hungry. But before you dismiss this as the ranting of an entomologist, consider some of the following facts. Most of these came from the Eat-a_Bug Cookbook (yes, this really exists).

Why do I think that we will be eating more insects in the latter part of this century? This is due to our continually growing population and the Efficiency of Conversion of Ingested food (or ECI). Beef cattle have an ECI of 10; sheep are at 5.3. This means that 90% of a steer’s diet is wasted (at least when we consume the animal). Most insects have ECI values from 16 (some caterpillars) to 44 (German cockroaches). Let’s also not overlook the amount of water it requires for larger mammals to be produced for consumption. It has been estimated that it takes roughly 2,600 gallons of water (over the life of the animal) to produce 1 pound of beef. Some insects (such as mealworms can exist their entire lives without consuming a drop of water – they metabolize what they need from the food they consume). Additionally, it is estimated that “eighteen percent of greenhouse gas emissions can be traced to cow farts and pig poop.” Although global consumption of meat is increasing (3 times since 1970) and is expected to double by 2050, we are already using 70% of agricultural land for livestock production. There just isn’t enough room to continue to raise large mammals for consumption. I know, you are getting hungry just reading this.

By the way, we already eat a lot of insects. We just don’t pay attention. The US government allows up to 60 aphids per 3 1/2 ounces of frozen broccoli, up to 3 fruit fly maggots in 200 grams of tomato juice, 74 mites in 100 grams of canned mushrooms, and the list goes on and on.

Yes, there are some down sides. For example, some individuals are allergic to insects. This may not be the same as those who are allergic to lobster and crab. Speaking of which, I am always amazed at the individual who think it is gross to consider eating a bug, but will gladly pay $40 for a lobster dinner. And the difference is… 10 legs vs. 6 legs? These are arthropods. Tasty arthropods.

Of course, it is always a good idea to cook your food (insect or otherwise). Not only are there various harmful bacteria which can be found on surfaces, but there may also be parasites. Yes, this is true of pigs and cows as well.

I doubt that you are going to run out and order a plate of chapulines based on this blog post, but you really should consider trying some. Think of it as a gastronomic adventure. By the way, the cookbook mentioned above has over 40 recipes with a number of different insects featured. Bon appetit!

One thought on “Eat a bug?”