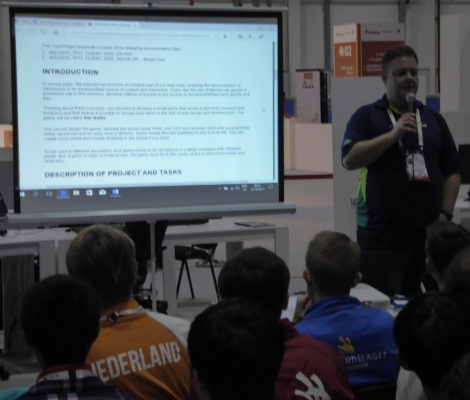 The client side project consisted of designing and developing a game in JavaScript. The morning was devoted to design; the afternoon project to actual implementation. Competitors were evaluated on how well their design matched the finished result (and how well the game actually worked). There were 15 separate elements in the game (called Star Battle). All elements were controlled with JavaScript. Once the game was finished, the results were uploaded to a leader board (using a supplied PHP file).

Here are the competitors listening to Marcelo’s presentation. 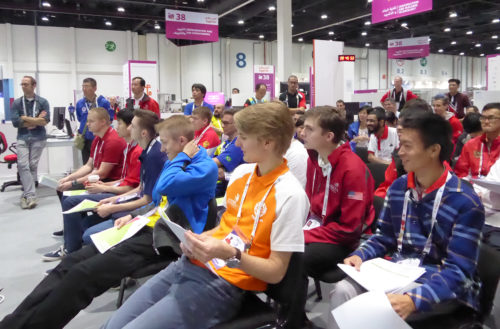 As one may suspect, it is very noisy in the competition area. Ear plugs are provided. This is the first time I have seen such a dispenser. 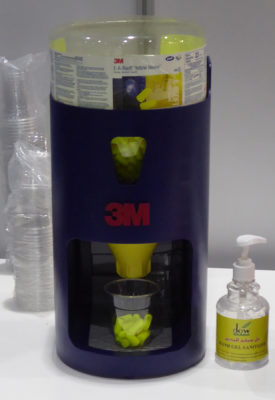 We encourage competitors to remain well hydrated. Food is also provided (in addition to a hot lunch in another tent). Here is the well stocked refrigerator in the morning before competitors arrive. 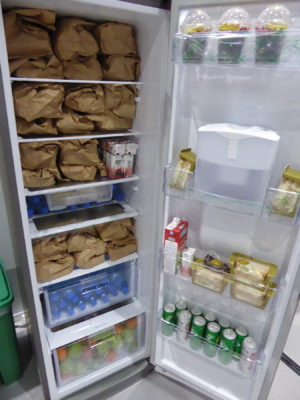 There is also a table with various additional snacks and drinks. 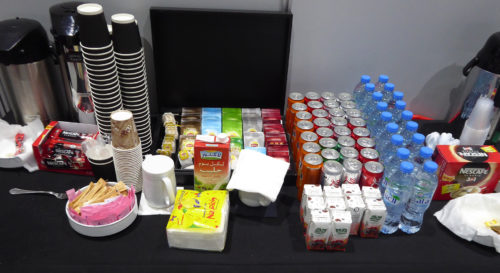 I confess that I have been eating way too much during my time here. The food is very flavorful. There are many combinations of flavors we simply don’t get in the U.S. It is great to be able to sample so many different foods.

We concluded the day with a review of competitor work on the client side project. We actually finished only a few hours after the competitors left for the day. Our focus was on the design aspect. Others were tasked with reviewing the actual game which had been developed. I wish I had been able to record the typing of some competitors. I was floor supervisor in the morning and was able to watch competitors work. I made it a point not to venture to the side of the venue where Riley was working. The speed of some competitors was amazing. In a few instances, fingers were a blur as the code was being created. Clearly, some competitors have been able to spend a significant amount of time preparing for this event.

Day 4 is the final day of the competition. This is followed by closing ceremonies on the next day and then all experts and competitors return to their respective countries. Frankly, I am amazed at how quickly this event has come together and is now concluding. As I mentioned before, it is like a family reunion with members passionately devoted to web design and development.