I recently completed teaching another MOOC (Massive Open Online Course). This one was on web design using the Adobe MUSE application and was done as part of the Adobe Education Exchange. This course ran from January 25 to March 11, 2016. If you have been reading this blog for a while, you may recall some of my earlier observations:

I thought it might be helpful to focus on additional insights rather than rehash the technologies and results. For those who are curious, the technologies remained similar to what I used in 2014 and the results were also similar.

As I have mentioned many times, it is simply not possible for a single individual to teach a MOOC; it takes a team. Many thanks to my colleagues who helped in so many ways:

If you are curious, I handled the European live classes. Of course, there were many others involved as well (Karla, Simon, Glenda, Phil) for example. My sincere thanks to everyone.

Before delving into my insights, let’s examine a few of the statistics.In this class, we had 2,295 participants from 81 different countries. Here is a quick map (representing those who dropped a pin while introducing themselves). I believe this covered nearly every habitable time zone on our planet. This also meant that someone was reviewing materials at all hours. 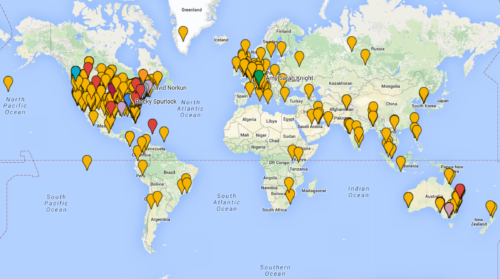 As you can readily tell, the majority of participants were from North America, specifically the United States. If we look at the overall dispersion of countries represented, we see the following (yes, I know the legends are very tiny – focus on the dispersion). The single blue line on the left is the US. 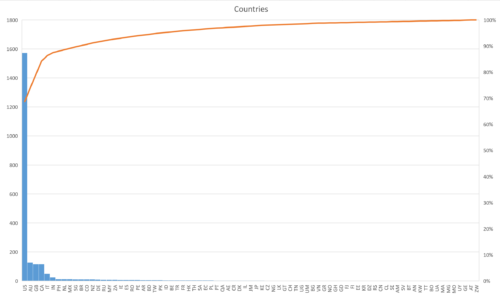 Let’s review some of my recent insights.

One question which was asked by several individuals at my school – how on earth can you do your “day job” when teaching so many? Clearly, the individuals asking don’t have much experience with this type of class. One prepares materials ahead of time (anticipating the majority of questions), including videos to explain various aspects. One then has many people help with the live classes (this included guest speakers – such as Glenda, Simon, and Phil). Those sessions last roughly 1 hour each week. I prepared all my materials over the winter break; I didn’t need to devote that much time to the MOOC while it was running. For example, there was peer review of assignments (and I reviewed those who received highest rankings from their peers). To anyone reading this, it is important to remember that a MOOC is not just a larger version of a “typical” online class. This is as true as the observation that an online class is not just a web based version of a traditional class. This is why it is so important to take one or more MOOCs as a student before attempting to teach one.

This class also experienced the one thing every person who teaches technology “dreads” – the interface to the tool (MUSE in this case) changed significantly with a new release during the third week of the class. Many students were confused because they immediately upgraded to the new version and then wondered why my video explanations pointed to features which did not exist in the new version. We did include more active explanations of the differences during our live sessions (which were recorded so others could view at their convenience). As always, when you are teaching technology, make certain you have a plan to handle interface changes.

As I have mentioned previously, it is important to have a means of monitoring social media as there may be a need to respond to questions when they arise (particularly when the interface changed). We used a hashtag for Twitter and developed a Facebook page. We referenced these throughout the course and reviewed them as time permitted. It was a great way to also garner insights and observations from those taking the class. Obviously we collected this information and will apply it the next time we offer a similar web design MOOC.

Since the majority of those taking the class were teachers (from elementary through secondary to college and graduate school), it was interesting to observe the interactions (particularly as the interface changed significantly). Most were quite understanding and willing to work with us as we discussed new features and explained where some features had been moved or replaced. Often, comments were observed like – “been there.”

One question I have (which I hope to address one of these days) – would we have gotten more participating if we offered the course in other languages as well? Obviously, my primary language is English (I do speak a little of several others). I realize English is spoken/ understood in many parts of the world. However, I think we may have gotten more participants from other countries if we had been able to provide translations.

Overall, this was a fantastic experience. I am so thankful for the help/ insights provided throughout the course. I also observed that we all face the same problems (regardless where we live on this planet). One receives so many words of encouragement throughout the class. Clearly the vat majority of people keep a very positive outlook and show this in their interactions with others. I hope I have the opportunity to teach another MOOC soon.