Today is day C1 (first day of competition). We have been counting down to this start for some time. The actual competition runs 4 days. Numerous aspects of web design and development are tested. As promised, I am providing the challenges all WorldSkills competitors are asked to complete today. Obviously, I do not have the media files to provide, but I do have the challenges. CMWEB students – are you up to the task? If you want to test your skills against the best of the best, make certain you do not use the Internet. Also, spend just the allocated time (one module is 3 hours in length, the other is 2 hours in length). Immediately stop your work at the end of this time. Frankly, I don’t think I would be able to type fast enough to complete the 2 hour challenge today.

Let’s review what happened during today (it went by in a flash).

We held a brief orientation session for competitors. Each then placed all materials in a locker and stood by their workstation until they were told to start. We recorded the starting time (and the ending time based on the starting time). There are two groups – group 1 started work on a 2 hour module (links to these are above); group 2 started work on a 3 hour module. Students were asked to sign out if they needed to use the washroom. The time away from their workstation was logged (as was their country code). I was the monitor for this. During the afternoon, I was one of 4 floor supervisors. We were the only experts allowed on the floor. If a competitor had a problem, we logged the time the problem was reported and then reviewed whether it was an actual problem. If so, they were granted extra time. For a number of competitors, there were issues with the graphics card and the associated driver. It appears that the machines needed a more powerful card than the vendor provided. Tonight, Gabriel and  his crew are replacing graphics cards in 40 computers. Gabriel, we really appreciate your effort – I know this will be a long night. We were also not allowed to provide any help to our compatriot competitor (Nick, in my case). Another expert had to help them.

One computer system crashed completely and had to be replaced. Obviously, that competitor was given that time after the new system was operational. We ask the competitor if they can work on another aspect of the work order. If the answer is no, they are asked to stand by  their workstation while the problem is resolved.

You will note that I have fewer photos today. Photography during the actual competition is not allowed. However, here is the debriefing at the end of the day. 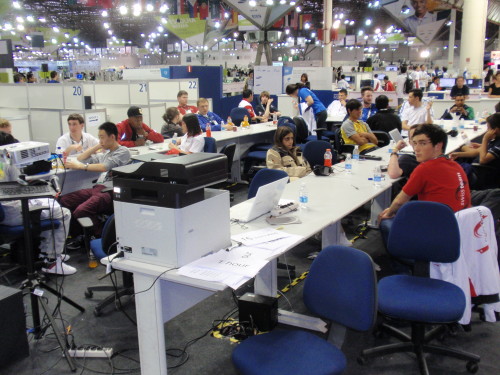 I was impressed with the number of people who stopped by the web design competition throughout the day. The  estimate was at least 60,000 people at the event every day. Although I am not good at estimating crowds, I would say the numbers were well into the tens of thousands. Keep in mind that we occupy a small amount of floor real estate in the overall pavilion. These are a couple of photos taken on different sides of the competition. I hope you have an idea of the size of this event. 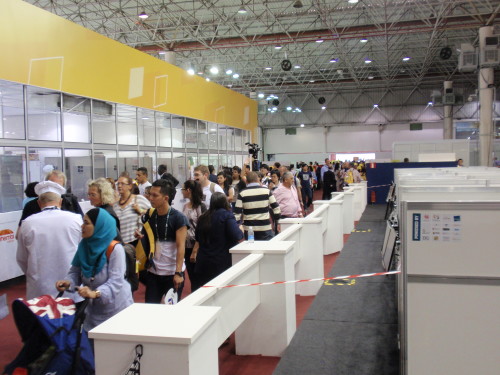 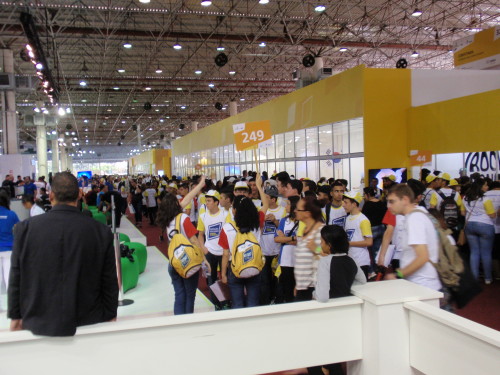 Note the person holding the 249 sign. Groups appear to have been numbered consecutively. I counted between 25 and 50 people in each group that passed by. You can do the math. There was a lot of humanity in the area today. I noted that many stopped and watched the code being developed. Many took photos (and video).

Along those lines, Julio was very kind to me and recommended that I be interviewed by a São Paulo television station. I am most appreciative of this opportunity to discuss the need for web standards based education for aspiring web professionals. The interview lasted a few minutes. I have no idea how much of this actually made the news tonight. I find it refreshing that career and technical education is valued so much in Brasil.

Tomorrow is day 2 of the 4 day competition. there will be additional challenges (one 2 hours in length; the other 3 hours in length). I will post those in my update tomorrow.

As always, I look forward to your insights and thoughts about my experiences in Brasil.