My wife and I took our grandsons on a tour of selected caves in Kentucky (and a natural history stop near Louisville). I thought readers might be interested in some of these spots. I used my GoPro camera and created a series of time lapse videos for various aspects of the trip. I provide links to 6 different videos. Enjoy…

First – here is a quick overview of our drive to Kentucky (from Illinois). It took us roughly 8 hours (which I compressed into a much shorter time span). We took a number of breaks along the trip (and I edited those out).

Driving to Kentucky from Mark DuBois on Vimeo.

Obviously our first tour focused on Mammoth Cave. Although roughly 405 miles of the cave have been explored, we focused on a 2 mile stretch with a guided tour. We went down about 250 feet into the earth. This cave is mostly a series of channels cut by water as it was seeking the lowest path to the ocean. There is a cap of sandstone (and shale) over the limestone. This means the majority of water currently runs off and does not directly enter the main cave today. This is why the majority of the cave is just an oval in cross section (with limited stalactites and stalagmites) [the former stick to the ceiling and you might trip over the latter – if you need help remembering the difference]. The channels were cut many years ago and would not fill with water today even with a very heavy rain. This also means the ceilings are very stable and will not collapse. Although it was dark for most of the tour, I was still able to capture a fair number of photos with the GoPro.

We next toured Onyx Cave. Although this cave is very close to the interstate, it is still well worth exploring. It was discovered in the past few decades when a parking lot was being constructed. This cave has water constantly entering it. This means you take a shower during heavy downpours. Because of this, the water becomes slightly acidic and creates many interesting formations as it dissolves and redeposits the calcium carbonate in the limestone. If you look carefully at the video, you will see cave popcorn, cave bacon and many other interesting flow-stone deposits.

We also took a walk around Sloan’s Crossing Pond. This is one of the few natural ponds. Instead of water running off or dropping into a sink hole, it accumulates in this pond. There were lots of interesting insects and birds we encountered during our walk.

We next went to Bowling Green, KY and visited the Lost River Cave system. This cave has an active river flowing through it. In fact, the only way to explore the cave is to take a boat into it. The first thing you encounter in the boat is the “wishing rock.” If you don’t duck, you will be wishing you had. Most of the cave was too dark to take photos, but we also examined the nearby butterfly house (native species only). This video should give oyu an idea of what this environment is like.

Of course, I would be remiss, if I didn’t mention a little about the insects in these caves. Here is a photo of cave crickets (genus Ceuthophilus) accumulating on the ceiling near the entrance to Mammoth Cave. 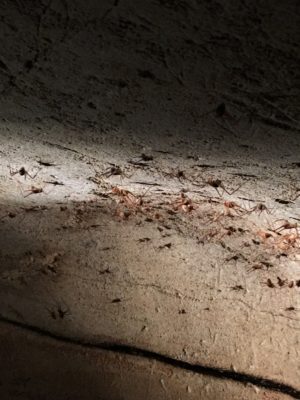 Lastly, we stopped by the Falls of the Ohio River State Park in southern Indiana (just across the Ohio River from Louisville, KY).  This is a great fossil locality (you can observe, not collect them). You have the chance to walk on the seabed which has been preserved from the Devonian (roughly 387 million years ago). You can see a large number of sponges, brachiopods, bryozoans, and a host of other fossils. the “falls” refer to a series of rapids which changed the elevation of the Ohio River by about 26 feet. Until a channel was constructed by the Corps of Engineers, this made a natural stopping point for travelers on the river. This was the only major obstacle on the river journey between Pittsburgh and New Orleans.

More than 6,000 species of fossils have been described at the falls. This includes roughly 250 different species of corals.

George Rogers Clark established the first English speaking settlement (named Clarksville today). His younger brother, William, set out from this spot (along with Meriwether Lewis) to explore the territory of the Louisiana Purchase.

John James Audubon made more than 200 sketches of 14 species of birds while living in the area.

Falls of the Ohio River Tour from Mark DuBois on Vimeo.

I hope you enjoyed these videos summarizing our recent travels.