Last month, I spent some time investigating development of mobile applications with a focus on the Android market. Over the holidays, I finally had a chance to investigate development of mobile apps in the Blackberry market. These notes are a summary of my findings. Please note that I will not be including a section on iPhone development as I don’t have a Mac (and as far as I can tell, most IOS development tools assume one has a Mac). Since I have a Blackberry Torch and hope to have a PlayBook in the near future, I decided to focus on these devices.

First – emulators. As with Android emulators, one must have Java installed on your computer.There are separate simulators for both the Torch and PlayBook. One needs to obtain these from the RIM website. Frankly, I found the site a bit hard to navigate and found that it was easier to use a search engine to find the link to the appropriate download. I did find the documentation at RIM well thought out and thorough. For example, the documentation to create your first Adobe AIR application for the PlayBook is comprehensive and easily explains how to accomplish this on a step by step basis. As before, one needs to download the appropriate SDK and simulators and install it (for the Torch). The PlayBook simulator is provided as a VMWare install. Curiously, neither simulator seems to be able to run a browser within the environment. See the screen captures below for the Torch emulator as an example. As you note in the first screen apture, the browser is clearly listed. However, when you click on the browser (either right or left button), all you get is a Java exception. After multiple installs and some research, I have concluded that this feature simply doesn’t work. 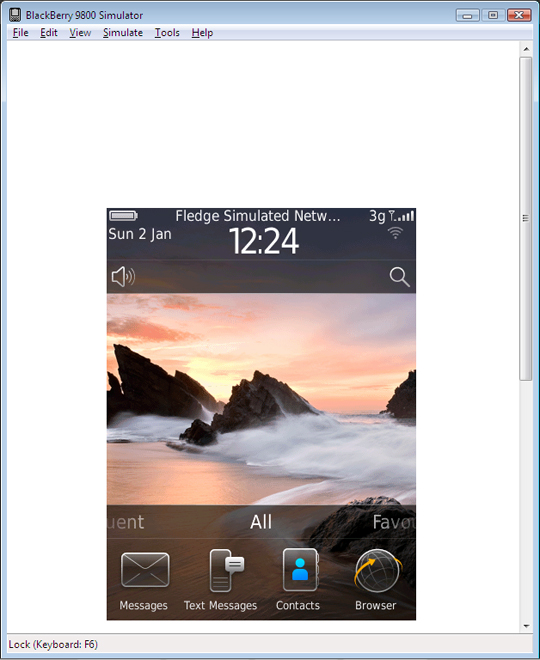 If one click on the browser icon (lower right corner of above image), one gets the following screen. Yes, the only available choice is to “continue.”

Although the PlayBook has yet to be released, there is an emulator for  it as well. As mentioned above, this environment comes as a VMWare virtual machine. Since I already was using the VMWare Player for several other virtual environments, I did not have to take the extra step of downloading and installing this player. Of all the emulation environments, this was the quickest to set up and get working. It also seems to be the most limited. Note the screen capture below. Other than the ability to test AIR based applications, I don’t see any possibility to work with a browser (the choices are all that exist in each category). 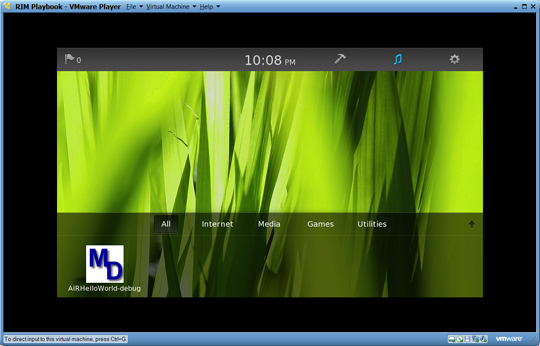 One minor issue – I had installed Flash Builder 4.5 in a VirtualBox virtual machine (I prefer to install trial software in virtual environments as it iss easier to clean up if there are problems). Of course, I hadn’t realized that I would need VMWare for the PlayBook emulator. CCuriously, I am able to communicate between these virtual environments. I used the settings tab in the PlayBook emulator to identify the IP address (192.168…) below. 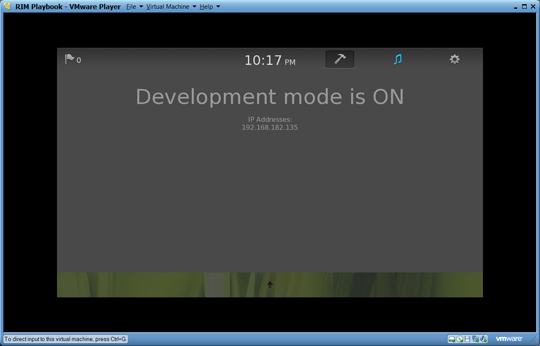 Within the VirtualBox virtual machine (Windows 7) where I installed Flash Builder 4.5, I was able to successfully ping the VMWare environment (even though the VirtualBox network is a 10.10… network). Frankly, I was amazed that these two environments actually seem to communicate with each other. I then was able to build the sample application in AIR and deploy it in the PlayBook emulator (just as per the instructions provided by RIM). The screen capture below shows the Flash Builder 4.5 run configuration. 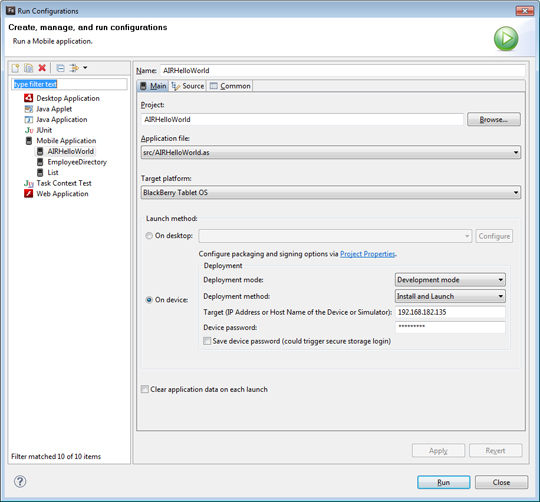 Second – screen capture utilities. Since I have a Blackberry Torch phone, I also wanted the ability to take screen captures (as I can do with my Android devices). After a fair amount of investigation, I discovered that a number of sites which were recommended for various utilities were all defunct. This left the JL_cmder tool as the only viable option. One needs to first install the proper USB drivers (which are automatically installed when one installs the Blackberry desktop manager (link came on a small CD provided with the Torch itself). Next one needs to  install the JavaLoader Commander. This is a command line utility which allows one to take screen captures of the actual device (connected via a USB cable). Given that I plan to investigate mobile web applications over time, I really wanted this capability. One item that no one seemed to mention is that in order for this to actually work, one needs to do two things. first – regardless of what the instructions say, place the necessary files in a C:\Program Files\JL_Cmder folder (any other location seemed to cause problems on my laptop where I was testing this). Second, after placing the files there, reboot the machine. You will then be able to take direct screenshots of your device. I show two below – the default screen and a browser view of one of my HTML5 web forms. 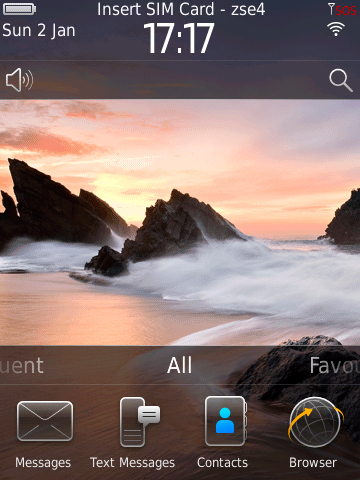 View of one of my HTML5 form pages in the default browser on a Blackberry Torch. 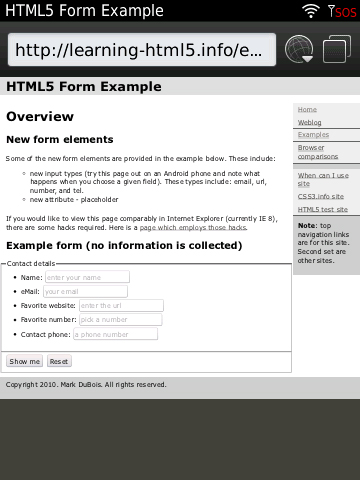 Ok, I now have a viable environment so I can begin work on mobile applications. I can work with both Blackberry devices and Android devices. I hope readers have found this overview helpful.